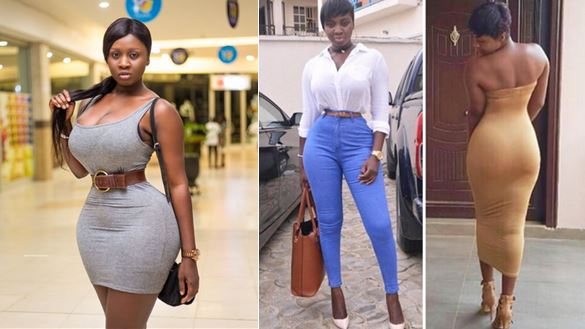 Ghanaian based Gambian actress, Princess Shyngle, who is known for her tiny waist has shared with her fans and the world why she sold her car and left her four bedroom house to live in a studio apartment.


According to her, she was trying so hard to impress the world and Instagram but got back to her senses after her parents stepped in.
She wrote;
The same people that called me stupid, desperate, a show off and runs girl when I bought my Porsche are the same people laughing at me, calling me a broke celebrity because I sold my car and now use uber . The same people that called me useless, show off, stupid and not smart when I rented and lived in a 4 bedroom house are the same people laughing at me now , calling me a disgrace, a broke slay queen because I now live in a studio apartment .
The same people that called me a show off , living a fake life because I used to fly business class and post pictures are the same people calling me broke and useless cuz I fly economy and post it . The same people that called me ashawo because I used to buy designer shoes and bags ( LV, Gucci , Prada) , are the same people calling me broke, classless and cheap because I now buy and wear ( primark, Zara, h&m ) . Buying a Porche, renting a four bedroom house, flying business class and spending on designers were the dumbest things I ever did, I was trying so hard to impress the world and the gram, using my every penny to look expensive while my bank account was empty but I thank God for my parents for slapping sense into me and got me to get rid of all the things I didn’t need and be myself.
They thought me to invest in lands, properties, shares, bank stocks etc. I now live on a monthly budget, I now pay myself salary every month out of my investments. I’m literally living my best life, I’m happy with myself and the life I’m living, I now have real and genuine friends that are with me for me and not for what they think I have. Life is so simple but we tend to make it hard on ourselves just to impress people but let me let you know one thing, you can never ever impress people , try and live a satisfied life because a satisfied life is better than a successful life.
Because our success is measured by others , but our satisfaction is measured by our own soul, mind and heart. Start planning for your future, for the next 5 / 10 years and use your money wisely .I hope my tbt will inspire someone out there.