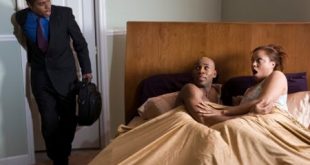 A man has gotten the shock of his life after walking in on his wife in bed with another man in the wee hours of the morning.
Taurai Mahlupi, a married Zimbabwean man got the shock of his life after he caught his wife red-handed with a soldier in their matrimonial bedroom at 3am, H-Metro reports.
Speaking to H-Metro yesterday, Taurai Mahlupi said he caught his wife- Sheila Tagwira- on Saturday morning at around 3 am groaning and moaning in pleasure on their matrimonial bed with a man presumed to be a soldier as he was clad in camouflage.
The shocking incident occurred at house number 2720 in Mkoba 16, Gweru.

When contacted for comment, Sheila became outraged by this reporter saying, “Nonsense, bullshi* get away,” before she hung up her mobile phone.
The husband who is a commuter bus driver, narrating his ordeal, said he received a prophecy from church sometime last month that his wife was cheating and before July 15 he would catch her red-handed in the act.
He further said his wife’s cheating has become more of a lifestyle rather than an event as he once saw love text messages between her and a police officer in her cellphone three months back.
“I am a member of an apostolic sect (Madzibaba) and a few months back I received a prophecy at church that my wife was cheating and before July 15 I would catch her bedding another man. I went to Zvishavane last Friday where I failed to secure return passengers to Gweru. I therefore phoned my wife that I wasn’t coming back home that very night. However, at exactly midnight I found someone who gave me $50 to hire my kombi from Zvishavane to Gweru.
“When I arrived home at about 3am. I got the shock of my life as I heard my wife speaking with another man in my bedroom. As I tried to come to terms with what was happening the man then opened the door and we exchanged blows. I heard my wife shouting to the man saying ‘Alec run away’. He was dressed in camouflage. As we wrestled he managed to sneak out and ran away leaving his military boot in the process. According to Madzibaba’s prophecy he advised me never to shed blood so I just left Sheila at home with our two kids. I am staying at a friend’s place,” he said.
Mahlupi further said his wife is sending him texts messages demanding that he returns the military shoe or risk being brutalized.
He also said the promiscuous Sheila, a cross border trader, is unappreciative as he opened a Flea market for her in Gweru City Centre near Choppies shop. Mahlupi said Alec drives a silver Nissan Caldina with registration number prefixed ACN.