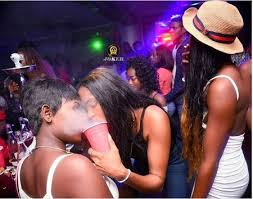 Ever wondered why bad girls get good guys? Take a look at this. Bad girls as seen by most people in the society are girls who are excessively social.
They are brave, outgoing and daring. They seem to enjoy life to the fullest while partying hard. These are some of the girls whose lives revolve round being in clubs and never missing a happening event in the society. They know the most talked about people and are able to identify the rich and wealthy guys.
Below are some insights as to why the bad girls get hooked to the good guys.
Bad girls are smart
These girls are outgoing ladies who know how to mingle. They are ‘not dulling’ in the real sense of the word. They are most times beautiful ladies who are fashion as and pull attraction everywhere they step into. They understand that most of the good men out there have careers and could be wealthy. And to ease off the built up tension of work and other life issues, they pass out time in the clubs and bars. The good girls are hardly found in this kind of setting.
Force of attraction
Basic knowledge of Physics could be likened to real life situation here. Just like when objects that are electrically neutral with equal amounts of neutrons (negative charge) and protons (positive charge) connect when in close proximity, two
individuals with different life styles bond too. Just as the protons could become negatively charged and the neutrons positively charged, the bad girl and the good guy would influence each other until they reach equilibrium. They become perfect for each other.


More experienced
The bad girls are often ‘long legged’. They seem to have been everywhere and have heard things that could guide them in their sojourn in life. They know things the good girls don’t and have firsthand experience of places. They have the ability to place the men who approach them and identify the exceptionally good ones among them. They know the players and understand the ‘no-time-to-waste-men’. They recognise potentials in the men once they see them and go extra miles to keep the men attracted to them.
Sexual satisfaction
Like most good girls who keep their legs closed, some bad girls keep theirs even closer. They taunt the men until they have built up a sexual tension in them. However, most of the bad girls are wild. They seem to explore always and know how to please the men. They could take men to different pleasurable heights before pushing them over the edge. They leave the guys in cloud nine at the end of the whole thing. Every guy wants a woman that would drive him wild in bed and give him an unforgettable time. So the bad girl is picked over the good ones here.
Relativity
One man’s meat is another man’s poison, they say. This explains why some men would deliberately choose a bad girl over a good girl even when they know about their escapades. Some bad girls after settling down with good men become submissive and trade their old habits for good ones. Men’s choice can’t be fully ascertained as one could never be sure of the magnetic force between them and the bad girls.


Compulsory retirement
There’s time for everything. The bad girls can’t remain bad forever. They get tired of their old ways at certain points in time. They calm down and mellow when they have seen it all. This doesn’t make them less desirable, they remain piping hot because they maintain their dress sense and good looks. In fact, they become better people with improved mannerism and are able to live responsibly after