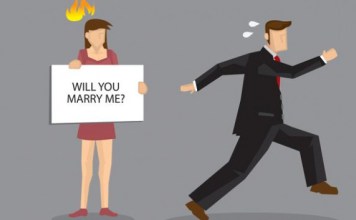 Commitment-phobes are flying all around, both male and female have this phobia and it’s becoming very difficult to find a partner who is interested in committed. If you have always been wondering why guys never commit in a relationship and why they run away from commitment, here are reasons why men run away from commitment.
The effort to maintain a relationship: “Men mature a little later than women, commitment at an early age would mean they need to compromise, adjust, give up on few things and put in a lot of work and they don’t want to do that, they are happy living in their bachelor life with no one to pester them”. “They believe the moment you commit, she becomes like your mother, she tells you what is right and wrong, who to hang out with and not, and you just lose all the space so they had rather be in casual relationships”.
Marriage and kids: “Men today are not comfortable with idea of marriage leave alone having kids after that, the idea that if they commit, they will have to get married and then plan a family too, scares them but they don’t mind a baby mama who can give them a baby and live alone”.
Previous failed relationship: “A lot of men carry baggage from previous relationships, chances are that they were committed to someone and were deeply hurt or they were about to commit and the person just vanished from their life or didn’t reciprocate and it is always difficult for such sensitive men to commit again in life”.
You’re not on his priority list: “Maybe he has a lot of other things that are planned and waiting to be executed, being committed is the last thing on their mind and committing to someone is a very big responsibility which they believe might become a hurdle in their path and they can only think of marriage, long-term relationships or commitment only when they have accomplished all their goals”
Not completely convinced: If he is not completely into you, he will never be ready to commit, he might love you a lot but there was something that he is still missing”.