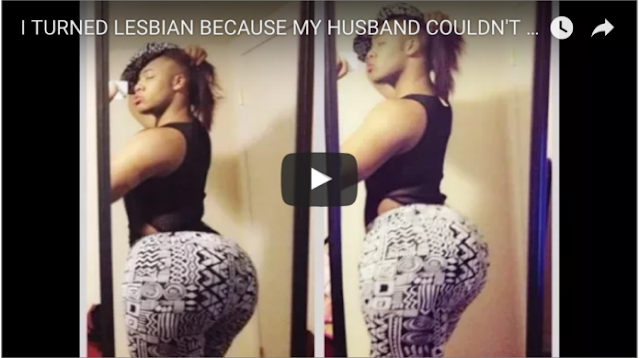 A Ghanaian woman who is married with three children has defended herself after her husband reported her to an Accra radio station for engaging in lesbianism.

The woman speaking in the Asempa Fm studio
The husband, Uncle Bob, had told Asempa FM’s Maame Akua that his wife was cheating on him with a woman.
But his wife, in an interview with the radio station, stated that her husband pushed her into lesbianism.
She said her husband, a freight forwarder, could not satisfy her in bed, so she agreed with him to go for a female lover who would satisfy her.
The woman said the agreement was one reason why she remained in the marriage.
She said apart from Uncle Bob’s inability to satisfy her, he also did not have time for her.
She said her husband was preoccupied with his business and hardly made time for her.
defended her decision to go for a female lover, saying it was her choice and that she did not want to cheat with men.
“…Do you know how it is… imagine you have a husband… you sleep with this man almost every single day.. there is something about it that it doesn’t get there… it doesn’t get to me… there is something about him… it doesn’t get to me.
“It is my choice to be a lesbian. I have made my husband understand that that is what I do. He agreed that since I am not cheating on him with a man I could have a partner,” she said.
The woman said she was tired of the marriage but was forced to stay in it because of her three children.
Calling into the radio programme, Uncle Bob said he indeed agreed to his wife’s affair with another woman, but could not live with the decision.
He said he loved his wife and could not bear her sleeping with another woman.
Uncle Bob denied that he was impotent and said that his wife was obsessed with the “thing” too much.
He claimed that he could spend an hour on her but she would still want more, adding that he could not stay at home for that every time because he needed to feed his family.
Uncle Bob said his plan was to sleep with his wife’s lesbian partner, so that she would know that he was a real man.
His wife, who was in the studio, however, dismissed his claims and urged him to admit that he has a problem.