Five Important Reasons Women Avoid Having S*x with Their Partners 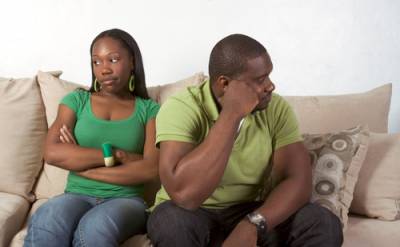 Men usually complain that their women seem to avoid s*x, and they can”t figure out why. For avoidance of doubt, here are some reasons why your woman may sometimes turn down your s*xual demand.
You can’t get hard.
In a survey, six percent of women complained that they hate s*x because their partners had s*xual issues, such as erectile dysfunction. When a man can’t get hard, s*xologists say, it leads to painful intercourse for the woman, and also prevents her from achieving 0rgasm.
To make your woman be on the heat for you, just as you are for her, take care of your package and work on your erecti0n.
She finds s*x painful.
S*x should feel good — but 11 percent of the women in a survey actually reported feeling pain during sex. In fact, a separate study of nearly 7,000 British women also found that one in 13 women feel physical pain during s*x.
This made women more likely to feel uninterested in s*x. Plus, they also had more trouble getting wet and reaching orgasm. Focusing on foreplay, oral s*x, and using a little lubrication when she needs extra help can help remedy the situation, says lead study author Kirstin Mitchell, Ph.D. Focusing on making her feel good will lead to less pain and more arousal, which ultimately leads to more (and better) s*x for the both of you.
She is anxious.
Thirteen percent of women in the survey reported avoiding s*x because they were anxious. This could potentially stem from any pain she’s feeling.
In the study mentioned above, women often felt anxious during s*x because they started anticipating painful s*x, Mitchell explains. Feeling self-conscious about it can also make her feel nervous, as she may not want to bring it up and hurt your feelings. If things feel awkward, just communicate with her: Openly ask if what you’re doing feels good and go from there.
There’s a lack of intimacy.
Just over 10 percent of women reported avoiding s*x due to a lack of intimacy. Feeling connected to you is crucial for her, since research shows that women have trouble reaching 0rgasm if they’re not psychologically aroused. That means you can’t just push the right buttons physically — she has to feel mentally turned on, too.
She’s too tired.
A quarter of women reported avoiding sex because they were too tired — which shouldn’t be too surprising, considering a 2010 poll from the National Sleep Foundation found that married people or couples living together were too tired for frequent s*x 21 to 26 percent of the time.
Plus, if she regularly goes to bed earlier than you, it may also be a sign that she doesn’t find s*x terribly exciting. Try initiating s*x earlier in the night to pique her interest.